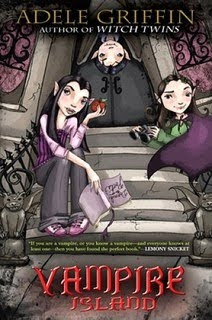 Sinopsis:
Life isn’t easy for vegetarian vampires trying to blend in with regular people in a new city. The Livingstone kids are fruit bat hybrids who have left Old World dangers, and immortality, behind for a “normal” life in New York City. But normal doesn’t necessarily mean easy, especially with lingering vampire traits complicating things.

Older sister Lexie’s super speed, amazing strength and knowledge of tragic poets often embarrass her in front of her classmates, and worse–her secret crush. Devious Maddy would rather invent ways to spy on her suspicious, possibly blood-sucking (i.e., rule-breaking) neighbors than stick to her new vegan diet. Hudson, who can still fly like a bat and talk to animals, is determined to save the planet, but with odd habits and vocabulary from the wrong century, how can he rally his classmates to his cause?

In her offbeat portrayal of this not-quite-normal family, Adele Griffin uses her unique brand of humor to introduce readers to three siblings who face challenges growing up that most “normal” kids couldn’t even imagine.